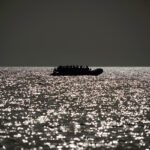 At least 16 migrants killed in shipwreck off Greece

At least 16 people are dead, among them an infant, after a boat carrying migrants capsized Friday near the Greek island of Paros – the third deadly incident requiring search-and-rescue operations this week, Greece’s coastguard reported, along a crucial corridor for refugees seeking to enter Europe, according to Washington Post.

Local media outlets reported Saturday that the coastguard had recovered overnight the bodies of 12 men, three women and an infant northwest of the site of the capsizing in the central Aegean Sea, Reuters reported.

Athens News Agency reported that 63 people had been rescued and would be temporarily housed on the island of Paros. The agency reported that some 80 people were estimated to have been on the boat, which Greek authorities said they suspected was en route from Turkey to Italy.