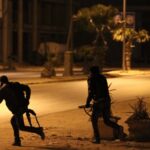 At least one person dead after night of clashes in Tripoli

At least one police officer was wounded after armed groups clashed last night in the area near Mitiga International Airport, south of Tripoli.

According to press reports, the clashes erupted after an armed group affiliated with the Ministry of Defense, known as the Second Security and Support Force, attacked police patrols with heavy weapons.

At that point, another militia, called the Directorate Support Force, affiliated with the Ministry of the Interior, intervened and attacked the other militia in question and seized an armed vehicle bearing the rival group’s logos.

Press reports indicated that Brigade 444, which affiliated with the Presidential Council, intervened to resolve the conflict and restore calm in the area.