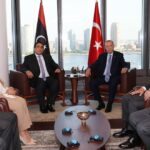 The Chairman of the Libya’s Presidential Council, Mohamed Al-Menfi, met with Turkish President Recep Tayyip Erdogan on the sidelines of the 77th session of the U.N. General Assembly last night in New York.

According to a statement by the Libyan council, the two leaders discussed “the latest developments in the political situation in Libya, the parliamentary and presidential elections and national reconciliation.”

During the meeting, the Turkish president underlined his “support for the steps taken by the chairman of the Presidential Council to achieve peace and stability in the country.”

0 0
Previous : After backlash, Dbeibeh’s government defends decision to assign land lots to foreign embassies
Next : At least one person dead after night of clashes in Tripoli