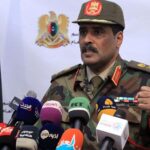 The official spokesman of the Libyan National Army (LNA), Major General Ahmed al-Mismari, said that the Audit Bureau sent a letter to the Central Bank of Libya approving the payment of LNA  soldiers salaries, day after the statement of the army representatives at the 5+5 Joint Military Committee (JMC)

Al-Ittihad newspaper quoted al-Mismari as saying that the Audit Bureau had previously received a letter from the Central Bank of Libya on the third of April to pay the salaries of LNA members, but it ignored it.

Al-Mismari pointed out that referring the process of disbursing LNA salaries to the Audit Bureau was a legal and administrative violation. He explained that LNA do not raise any problems, and their units roam the desert to fight terrorist organizations and cross-border criminal gangs.

Last Saturday, LNA representatives at JMC announced the suspension of all their work in the committee. The statement spoke outgoing Prime Minister, Dbeibeh’s responsibility for not appointing a minister of defense and keeping the position for himself for personal purposes and gains, as well as not disbursing LNA salaries, more than once, most recently not spending four months in a row

0 0
Previous : HoR, HCS meetings in Cairo come under UN auspices, says Spox
Next : Dialogue between Libyan HoR and HCS on constitutional basis kicks off in Cairo