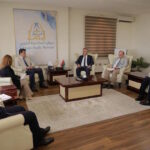 Shakshak’s meeting with the Turkish ambassador comes within the framework of implementing the technical competencies entrusted to the Audit Bureau, and as a continuation of the successive meetings of the Chief of the Audit Bureau with Turkish officials and companies that have contracts in Libya, the Bureau said in a statement.

The meeting, held at the Audit Bureau headquarters in Tripoli, dealt with the Audit Bureau’s observations on contracts concluded with Turkish companies in Libya, and ways to solve any problems or obstacles that prevent them from resuming their tasks and completing their projects, thus contributing to activating and accelerating the movement of construction and companies fulfilling their obligations and getting their full rights.