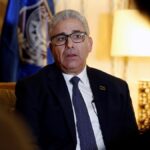 Former Libyan Interior Minister Fathi Bashagha has hired a U.S. lobbying firm to advocate for him in Washington, in a deal worth nearly a million dollars.

Brownstein Hyatt Farber Schreck filed a report on July 2 to the U.S. Justice Department, in order to formally register Bashagha as a client under the federal Foreign Agents Registration Act (FARA).

The report, which was released yesterday for public disclosure, reveals that Bashagha signed an 18-month contract with the lobbing firm to “assist with promoting free and fair elections in Libya” and “support anti-corruption efforts within the financial system and donor funded programs”.

The firm said it planned outreach with U.S. government officials, but the contract did not define the scope of that work.

The firm’s monthly retainer is $50,000 effective through January 28th 2022, at which time the contract is automatically renewed for additional 12-month term. This makes the accumulated value of the contract $900,000.

It is noteworthy that Bashagha has been widely reported as a candidate for an upcoming presidential election in Libya.