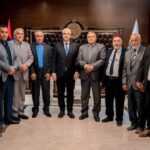 The Prime Minister-designate, Fathi Bashagha, has listened to the vision of the leaders of the National Fedral Party on the political crisis.

This came during a meeting between Bashagha on Monday, the head of the National Fedral Party, Belqasim al-Nimr, and a number of party leaders, at the Prime Ministry headquarters in Benghazi, according to a statement by the Benghazi-based government.

The National Federal Party calls for the adaptation of a federal system in Libya as three states; Cyrenaica, Tripolitania, and Fezzan, in addition to adopting the constitution of Libya of 1951 after making specific amendments to it.