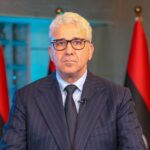 Bashagha: We avoided war by not entering Tripoli

An imminent war in Libya was avoided on Thursday after a military convoy, which was set off to protect the new Libyan government’s entrance to Tripoli, retracted to Misurata, Prime Minister-designate Fathi Bashagha said on Friday.

In a recorded speech released via his Facebook page, Bashagha said the military convoy, which traveled along the coastal road from Misrata to Tripoli, was attacked by armed groups loyal to outgoing premier Abdul Hamid Dbeibeh who refuses to handover power to the new government.

“[The armed groups] stood in the way by firing gunshots at our vehicles that displayed the white flag,” Bashagha said.

The Bashagha-affiliated convey preferred to return to Misurata and not engage in the conflict; an action that, according to the designate premier, has been praised locally and internationally.

However, Bashagha stressed that his government is still “determined” to assume office in the capital even after the incident on Thursday.

“There will be no parallel government anywhere in Libya,” he affirmed.