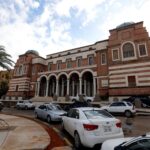 CBL denies freezing sums of its assets by Bank of England

The Central Bank of Libya (CBL) denied authenticity of news circulated by some TV channels and newspapers about the Bank of England freezing sums of its assets.

CBL called in a statement on all media outlets to adhere to professionalism and objectivity, and to investigate accuracy and credibility.

Local media reported that three billion pounds of CBL assets in England had been frozen.

According to reports, Britain had sought – on several occasions – to obtain legislation from the House of Commons to deduct part of Libya’s frozen funds, to pay compensation to the victims of the Irish Republican Army, accusing Gaddafi’s regime of supporting the IRA’s attacks in England in 1970s.