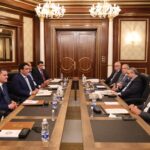 Libya’s outgoing prime minister, Abdul Hamid Dbeibeh, met today with the top officials at executive branch to discuss the latest developments in the country, according to a statement by his government.

Namely, those officials were Chairman of the Presidential Council, Mohamed al-Menfi, his two deputies Abdullah Al-Lafi and Mussa Al-Koni, Chairman of the High Council of State Khaled Al-Mishri, and Governor of the Central Bank of Libya, Saddek Elkaber

Head of the Audit Bureau, Khaled Shakshak, and the Headof the Administrative Control Authority, Suleiman Al-Shanti were also present at the meeting.

The officials reportedly discussed a number of issues, including this weeks deadly fuel tanker explosion in southern Libya. In addition, they also follo “the public affairs of the state during the first half of this year”and “disclosure and transparency steps by the Central Bank of Libya and the Ministry of Finance”.

This gathering of western Libya’s senior political officials notably comes few days after a rare meeting between Speaker of the House of Representatives, Aguila Saleh, and Turkish President Recep Tayyip Erdogan, in Ankara.