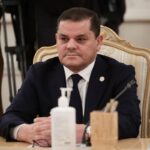 Press reports, citing a secret report by the Libyan Intelligence Service, revealed Tuesday that the Prime Minister of the Government of National Unity (GNU), Abdel Hamid Dbeibeh, announced his intention to run for presidency in the upcoming elections, during a meeting he held in the city of Misurata with militia leaders and dignitaries.

Al-Sharq al-Awsat newspaper quoted Dbeibeh as saying he has arrangements in particular with Imad al-Sayeh, Head of the High National Elections Commission (HNEC).

“Dbeibeh is seeking to announce his candidacy within the next few days, and has allocated $70 million. He is in the process of assigning his deputy nominally to conduct his duties in coordination with him,” the report said.

Dbeibeh intends to form a working room headed by his close associates whose mission will be to work with the Minister of Interior to support Dbeibeh’s chances of winning the elections, according to the report.