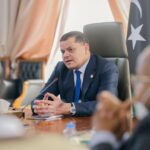 Dbeibeh obstructs budget approval by raising its value to 111B LYD, says MP

Abdel Nasser Al-Naas, a member of Libya’s House of Representatives, has accused Prime Minister Abdul Hamid Dbeibeh of attempting to obstruct the House from passing the state budget bill by raising its value to 111 billion Libyan Dinars (more than 24 billion USD).

“The proposed value is large,” Al-Naas told reporters on Thursday. “The representatives already rejected a 93 billion value because this amount of spending is incompatible with the remaining time for the government’s tenure”.

“Requesting this number [of money] aims to impede the House, nothing more,” he said.

The Libyan representative anticipated that the House will reject the proposed budget value.