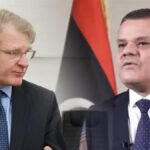 Abdul Hamid Dbeibeh, Prime Minister of the Government of National Unity, would hold talks tomorrow with the U.S. ambassador to Libya, Richard Norland, as well as the Deputy Assistant Secretary of the Treasury Eric Meyer in Tripoli, local press reported on Sunday.

Dbeibeh and Meyer are reportedly scheduled to hold bilateral meetings, while other meetings will be held between Libyan and international officials on the sidelines.

It is expected that a new communications contract will be signed between the Hatif Libya telecommunication company and the American company Infinera.

0 0
Previous : 3845 people test positive for COVID-19, 31 others dead in Libya
Next : Parliament to discuss budget, election law on Monday