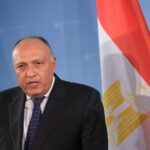 Egyptian Foreign Minister, Sameh Shoukry, called on the international community not to deal with the Libyan outgoing Government of National Unity (GNU), led by Abdul Hamid Dbeibeh, after it failed in its mandated tasks, calling on the United Nations to take clear measures against its illegality.

The official Spokesman for the Egyptian Foreign Ministry, Ahmed Hafez, said in a statement today, that “expanded discussions” were held today in Cairo, headed by the foreign ministers of Egypt and Greece, which dealt with all aspects of bilateral cooperation and ways to enhance them, in addition to exchanging visions and “estimates” and coordinating positions towards regional and international issues of common interest.

Shoukry added that it was agreed with Greece on the necessity of the exit of foreign forces from Libya, holding elections and supporting the efforts of the House of Representatives without foreign interference.

Shoukry stressed that GNU in Tripoli does not have any powers to sign any international agreements.