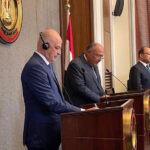 Greek Foreign Minister Nikos Dendias said that the memorandum of understanding signed between the Libyan outgoing Government of National Unity (GNU) and Turkey is illegal and rejected by the international community.

The official Spokesman for the Egyptian Foreign Ministry, Ahmed Hafez, said in a statement today, that “expanded discussions” were held today in Cairo, headed by the foreign ministers of Egypt and Greece, which dealt with all aspects of bilateral cooperation and ways to enhance them, in addition to exchanging visions and “estimates” and coordinating positions towards regional and international issues of common interest.

Dendias indicated that Egypt and Greece are working to restore stability to Libya and make the Mediterranean a stable region.

0 0
Previous : Egypt FM calls on international community to take measures against Libyan outgoing government
Next : US “strongly” condemn killing of 15 migrants in Libya