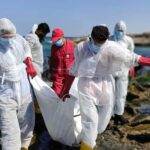 US “strongly” condemn killing of 15 migrants in Libya

The Embassy called on Libyan authorities to “swiftly investigate this horrific attack, prosecute the criminals involved, and intensify efforts to combat human trafficking to the fullest extent.”

Libyan rescue workers have recovered at least 15 bodies found on the coast in Sabratha including a number burned in a boat and others on the beach, a member of the Red Crescent in the city said on Friday.

A security source in Sabratha said the dead people were migrants caught in a dispute between two rival groups of people smugglers in the northwest city, a major hub for illegal migration across the Mediterranean.

Pictures shared on social media showed a burning boat on a beach with dark smoke pouring from it and what appeared to be the same vessel, scorched inside and containing charred human remains.

Libya was a key route for clandestine migration towards Europe even before the 2011 uprising that overthrew dictator Muammar Gaddafi.

The lawlessness that ensued bolstered its position on the world’s deadliest migration route.

People smugglers from the western city of Sabratha – some 300 kilometers (185 miles) from the Italian island of Lampedusa – continue to play a key role.

Migrants often face horrific treatment at the hands of smuggling gangs, and rights groups have repeatedly accused authorities and armed groups operating under state auspices of torture and other abuses.

Since the start of the year, more than 14,000 migrants have been intercepted and returned to Libya, according to the International Organization for Migration (IOM).