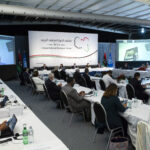 GENEVA – Abu Bakr Issa Al-Obaidi, a member of the Libyan Political Dialogue Forum (LPDF), told his counterparts, during Geneva talks on Tuesday, that delaying the upcoming December elections would create another legitimacy crisis in Libya.

Al-Obaidi pointed out that the legitimacy of the current interim government ends after Election Day, scheduled for December 24, adding that a political vacuum would surface in Libya if the presdential and parliamentary elections were postponed.