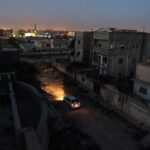 Electricity situation in eastern Libya is worse than west, report

Libya’s eastern region currently relies only on three faulty power stations, which makes the state of electricity in this region worse than the western region, according to a press report.

The power network between the eastern and western regions are expected to reconnect in the coming weeks, which is estimated to help ease the electricity crisis in both regions, Libyan news website Fawasel report on Thursday, citing an informed source.

Five people died in eastern Libya, Cyrenaica, between June 27 to July 29 as a consequence of the electricity cuts, according to a recent report by the General Electricity Company of Libya (GECOL).