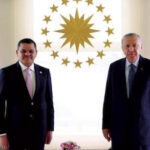 Erdogan to visit Libya on Friday

Turkish President Recep Tayyip Erdogan is paying an official visit to Libya, the first of its kind since September 2011, during which he is likely to meet in Tripoli with the Head of the Government of National Unity (GNU), Abdel Hamid Dbeibeh.

Erdogan intends to visit Libya on Friday October 15, special sources told Libya 218 TV, without disclosing more details about the visit and its agenda.

The Turkish presidency in Ankara did not announce, until Wednesday morning, any information about the visit.

It is noteworthy that Dbeibeh had revealed in August that the Turkish president intends to visit Tripoli in October to attend the second meeting of the Libyan-Turkish Strategic Cooperation Council.