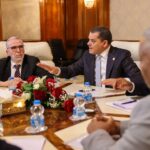 Abdul Hamid Dbeibeh has dismissed Mustafa Sanalla, chairman of the National Oil Corporation (NOC), according to a leaked governmental decree seen by The Libya Update.

The premier of the Tripoli-based government decided to replace Sanalla with Farhat Omar Bengdara, who served as Libya’s Central Bank Governor from 2007 to 2011.

The move appears to be part of an overall shake-up of the NOC board as the decree lists Hassan Abdullah Safar, Massoud Sulieman Mussa and Ahmed Abdullah Amar as new members of the board, in addition to the Undersecretary of the Ministry of Oil and Gas

Sanalla led the state-owned company for 8 years since May 2014. Despite the expiration of his tenure of NOC leadership, he remained in office as he managed to deal with the country’s rival governments, and maintained good relations with foreign diplomats.

After Dbeibeh assumed office, Sanalla embroiled in a public feud with Oil Minister Mohamed Aoun. The two officials have had long-running disagreements over management of the country’s oil sector, which aggravated to tit-for-tat moves including trading accusations publicly.

In June, Aoun proposed a change to NOC leadership during a cabinet meeting. Dbeibeh told his oil minister that he will take the proposal into consideration.

0 0
Previous : Nicola Orlando: Italy and France committed to help Libyans go to elections
Next : Libya records average of 17 Coronavirus cases in a week