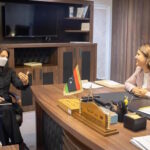 Libyan Foreign Minister, Najla Mangoush, discussed on Tuesday in Tripoli with UN Under-Secretary-General for Political and Peacebuilding Affairs (UNDPPA), Rosemary DiCarlo, and the Head of UN Support Mission in Libya (UNSMIL), Jan Kubis, the Libya Stability Initiative, and the ongoing preparations for holding the initiative’s International Ministerial Conference hosted by Libya on Thursday, October 21, according to the Libyan Foreign Ministry.

Mangoush gave DiCarlo an overview of the contents and tracks of the Libya Stability Initiative, with its military-security and economic aspects, noting that the aim of this initiative is to develop appropriate mechanisms and practical procedures for the actual implementation of the results and outputs of the Berlin conferences I and II on Libya, and the relevant Security Council resolutions No. 2570 and 2571, in order to achieve stability in the whole of Libya, the Ministry said in a statement on Tuesday.

The meeting also discussed the upcoming presidential and parliamentary elections, scheduled for the end of next December, as well as the importance of fully implementing the outputs of the Libyan 5+5 Joint Military Committee (JMC), and providing the necessary support to it to accomplish its tasks, it added.