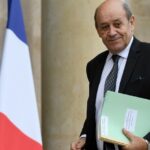 France wants to see change of action from Turkey on Libya

PARIS – A “verbal ceasefire” is in place between France and Turkey after months of rancorous exchanges that strained the relations of the NATO allies, the French foreign minister said Friday.

Jean-Yves Le Drian told BFM television that he welcomed the change in tone but said it had to be matched by more concrete steps from Ankara.

“There is a kind of verbal ceasefire. That’s good but it’s not enough,” Le Drian said.

“The verbal ceasefire does not mean acts and we expect Turkey to act on sensitive subjects,” he said, citing Libya, Syria and also the Eastern Mediterranean.

“We will see if President Erdogan has changed more than just his words but also his actions,” the top French diplomat said.