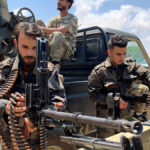 WASHINGTON – Libya’s military leadership is drawing up plans to expel foreign fighters and mercenaries from the country, Assistant Secretary-General of the United Nations, Resident and Humanitarian Coordinator for Libya Georgette Gagnon said on Friday.

“As of today, there has been no withdrawal of mercenaries, or foreign fighters, but plans are being prepared for withdrawal, notably by Libya’s Joint Military Commission, the JMC or five plus five,” Gagnon said during a UN Security Council (UNSC) Arria formula meeting on the departure of foreign combatants from Libya.

“The joint military commission is due to further discuss a precise plan for the sequencing of the withdrawal of the mercenaries,” she said. “A phased structure for this, and disarmament prior to withdrawal, is the subject of further negotiations between the parties.”

0 0
Previous : France wants to see change of action from Turkey on Libya
Next : Libya’s joint military committee to meet Thursday