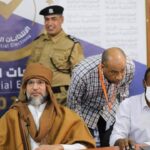 Saif al-Islam Gaddafi, son of late Libyan leader Muammar Gaddafi, officially announced that he will run for president in the upcoming elections on December 24.

Video footage of the 49-year-old was released on the internet showing him signing his candidacy papers at the the High National Election Commission (HNEC) branch office in Sabha.

The HNEC itself confirmed the news in a statement, saying that Gaddafi had “completed all legal formulations according to Law No. (1) issued by the House of Representatives regarding the election of the head of state.”

It is noteworthy that Gaddafi was tried in absentia in 2015 by a Tripoli court at which he appeared via video-link from Zintan, and which sentenced him to death for war crimes including killing protesters during the 2011 uprising. He is also wanted by the International Criminal Court (ICC).

Commenting on the news of Gaddafi’s presidential bid, Fadi El Abdallah, a spokesman for the International Criminal Court (ICC), reportedly said that the ICC “does not comment on any political matter” but the legal status of Saif al-Islam Gaddafi before the court “has not changed”.

0 0
Previous : US ambassador: There will be no tolerance with those seeking to obstruct Libya elections
Next : NCDC: 599 new COVID-19 cases recorded in Libya