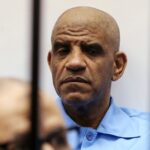 Abdullah Senussi, the intelligence chief of late Libyan ruler Muammar Gaddafi, is denied treatment for cancer in Tripoli’s Mitiga prison, where he is held under criminal charges, his daughter told reporters on Sunday.

Anoud Senussi said that her family adjured the Justice Minister and Attonery-General to allow a medical team to examine her father’s health, which she says has deteriorated since he was detained in Mitiga prison.

An armed group known as Rada’a, which controls Mitiga prison, has restricted the family’s access to Senussi, allowing visits to last for 10 minutes only, Senussi’s daughter said.

The former spy chief was sentenced to death in July 2015, but his case case was under appeal as of October 2015. However, Anoud Senussi says that her father is being tried again for the June 1996 killings in Abu Salim prison, with an upcoming court hearing scheduled for August 16.