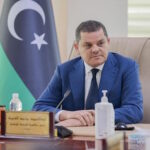 GNU Head: What Fezzan suffers is due to years of war and divide

Abdel Hamid Dbeibeh, Head of the Libyan Government of National Unity (GNU), said what the Southern region (Fezzan) suffers “is nothing but product of years of war and divide”, stressing that the government’s presence in the city of Sebha is “evidence of our determination to proceed to help the South.”

In his speech during the fifth regular meeting of GNU Council of Ministers, held Sunday in Sebha, Dbeibeh reiterated: “there is no war in Libya after today, in Sebha or elsewhere, and the government is committed to securing the Southern region.”

The Prime Minister indicated that GNU is now working to complete its security plan to support security directorates to combat crime and terrorism in the South and in all of Libya, as well as securing holding the elections in the Southern region, scheduled for December 24.

0 0
Previous : LNA official: Russia assured us of need to evacuate foreign forces and mercenaries from Libya
Next : HoR committee arrives in Rome to discuss Libya elections with UN