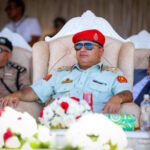 LNA official: Russia assured us of need to evacuate foreign forces and mercenaries from Libya

Director of the Office of the General Commander of the Libyan National Army (LNA) confirmed that Russia affirmed its support for stability in Libya and the necessity of evacuating foreign forces and mercenaries and dismantling armed groups, in accordance with the Geneva Convention on Ceasefire, and as reached by the Libyan 5+5 Military Committee, said the Director of LNA Moral Guidance Department, Major General Khaled Al-Mahjoub, on his official Facebook page.

Russia also stressed the need to establish elections on time, which are scheduled for December 24, 2021, according to Lieutenant General Khairy al-Tamimi, Director of the Office of LNA Commander, Field Marshal Khalil Haftar.

Last Wednesday, LNA Commander sent a high military delegation to Russia, headed by his Office Director, al-Tamimi, who is also a member of the 5+5 Military Committee.

5+5 is a committee made up of 5 LNA officers and 5 officers from the forces in the Western region. Its main purpose is to unify the Libyan military institution.

0 0
Previous : Turkey-backed fighters accused of looting Libya’s antiques, report
Next : GNU Head: What Fezzan suffers is due to years of war and divide