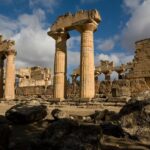 Around 8,000 Libyan artefacts were stolen and smuggled out of the country since 2011, according to a recent report by Art Critique, which also accused foreign fighters backed by Turkey of looting Libya’s antiques.

The French website published a report last Wednesday, which viewed the looting of antiques in the Middle East and North Africa and included a point of focus on Libya.

“While Iraq and Syria have received much of the media attention surrounding the international traffic of looted artefacts, Libya has also become a smuggler’s free-for-all in the wake of Muammar Gaddafi’s 2011 ouster,” the report said.

“Not only were hundreds of priceless artefacts, including the famed “Benghazi Treasure”, looted from museums during the initial chaos, but the civil war that followed also gave “artefact poachers” the opportunity to ransack ancient ruins and other archaeological sites and steal objects that have laid buried since ancient times,” it added

In the aftermath of the second civil war in Libya, the French website reported that the foreign fighters that were sent by Turkey in 2020 “quickly built a reputation as looters both of antiques and of mundane valuables taken from Libyan citizens.”

“These Turkish troops and mercenaries’ continued presence in Libya also casts doubt over the chances for fair and free elections to take place in December,” the report said. “If elections are not held on time, this means that the current situation favouring looters and smugglers is unlikely to end any time soon.”

“Turkey’s continual refusal to remove its troops from Libya only means that valuable artefacts will continue to be looted with impunity. The only difference is that they will be most likely smuggled not to London, but to Ankara and Istanbul,” the report concluded.

Antiquities looting: an ongoing crisis as well as a shameful piece of history https://t.co/qCy6f1hUEY pic.twitter.com/A5qTh8Pqcg

0 0
Previous : Parliament to discuss budget, election law on Monday
Next : LNA official: Russia assured us of need to evacuate foreign forces and mercenaries from Libya