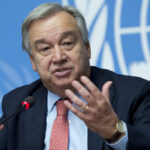 The UN chief is “following closely” the latest political crisis unfolding in Libya following the parliament’s decision to name a new prime minister, which which threatens to return the country to a stand-off position between two rival authorities.

In a statement issued by his Spokesperson on Friday, Secretary-General António Guterres called on “all parties to continue to preserve stability in Libya as a top priority.”

He said he took note of the vote taken on Thursday, by the country’s House of Representatives, to designate a new Prime Minister Fathi Bashagha.

Libyan lawmakers voted to put a new interim government in place, over the objections of the internationally recognized Prime Minister, Abdul Hamid Dbeibeh,