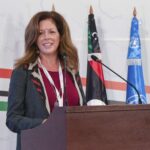 Diplomats said UN Secretary-General Antonio Guterres is mulling the prospect of appointing the US diplomat, Stepanie Williams, as a special envoy for UN to Libya, after outgoing envoy, Jan Kubis, resigned from his job, according to Foreign Policy magazine.

It is noteworthy that Williams had served as the acting UN special representative for Libya and deputy head of the UN Support Mission in Libya (UNSMIL).

Foreign Policy said Russia had blocked the appointment of a veteran British UN’s troubleshooter, Nicholas Kay, as the UN special envoy to Libya.