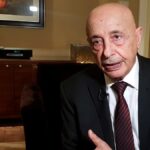 House speaker: All foreign troops in Libya must go

Aguila Saleh, the Speaker of Libya’s House of Representatives, said on Wednesday that he doesn’t accept the “presence of any foreign military powers or bases in Libya”, calling the security deal signed between Turkey and the former Libyan government “unconstitutional” and “null”.

“As far as this agreement with Turkey is concerned, it has not been ratified by the House of Representatives and is thus unconstitutional and null,” Saleh told Greek newspaper Kathimerini in an interview.

In reference to the government of former Prime Minister Fayez Al-Sarraj, Saleh said that “the entity that made this deal with Turkey was not elected by the Libyan people and never received a vote of confidence from the House.”

“It was an illegal, unconstitutional government, forced upon us by the international community without the consideration of the citizens,” he added.

Saleh also stated that the controversial maritime deal that Al-Sarraj’s government signed with Turkey cannot be addressed until after the national elections in December.

“I believe that whoever deals with this matter should have the political legitimacy and authority to do so, in order to have the power to accept or reject certain things,” he said.

The House speaker expressed confidence that the December elections would take place on time “with the support of the Libyan people and the international community”, adding that “whoever attempts to prevent this will suffer international sanctions.”