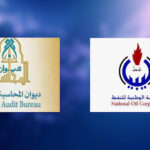 The Libyan National Oil Corporation said the Undersecretary of the Audit Bureau and its current acting president, Alaa al-Masallati, “has deviated from the role and objectives of the Bureau set forth in Article 1 of Law No. 19 of 2013 regarding the reorganization of the Audit Bureau.”

This came in response to a letter sent by al-Masallati to the Prime Minister Abdul Hamid Dbeibeh calling for the suspension of NOC procedures and financial resolutions, which he considered illegal, and which included, according to the Corporation, the establishment of an oil refinery, and the extraction of cooking gas from the burnt gas in the El Sharara oil field in the southern Libyan region.

The Corporation said, in a statement on Tuesday, that its arrangements are in compliance with the government resolution No. 496 of 2021, issued on September 28, which also included the maintenance and development of the infrastructure of Waha Oil Company lines.