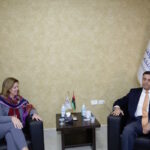 Williams stressed the international community’s support for the elections as a popular demand for peace and stability in Libya, HNEC said in a statement.

The meeting, held at HNEC headquarters in Tripoli, also discussed ways to strengthen the proposed efforts to achieve the expected entitlements, according to the statement.

Williams said they discussed ways to consolidate and strengthen efforts to keep the electoral process moving forward.
“I reiterated the full support of the United Nations and of the international community to the HNEC as an independent institution in charge of the electoral process,” UN Adviser tweeted.
“The holding of inclusive, free, fair, and credible national elections in Libya is the only possible response to the overwhelming and consistent demand of the Libyan people and the only path to peace and stability in Libya,” she added.
Tags:HNECLibya electionsUNSMIL

0 0
Previous : In response to Audit Bureau, NOC refuse to stop financing oil refinery construction
Next : Over 32,000 migrants intercepted and returned to Libya in 2021, says IOM