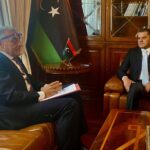 Italian Ambassador to Libya, Giuseppe Buccino, had a word of warning to Prime Minister Abdul Hamid Dbeibeh during a meeting in Tripoli as he alerted that the status quo in Libya is “untenable”.

According to Italian embassy in Libya, the two had an “in-depth discussion” in which Buccino highlighted that the current situation in Libya “may bring the country back to dangerous confrontation.”

At least 16 people have been killed and 52 wounded in recent fighting between armed groups in Tripoli. No motive for the fighting was immediately apparent, but it is the latest wave of an on-and-off violence to rock the capital as rival militias, each with their own political affiliations, compete for power.

I stressed that the status quo is untenable. It may bring the country back to dangerous confrontation. pic.twitter.com/Hrz3YeQPuj