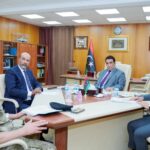 Chairman of the Presidential Council, Mohamed al-Menfi, was briefed on Monday by Lieutenant-General Muhammad Al-Haddad on the security situation in the capital following three days of clashes between armed groups, according to a statement by the council.

Al-Haddad, who serves as Chief of General Staff of Government of National Unity’s forces, also discussed with al-Menfi measures to preserve the ceasefire and to ensure protection for civilians as well ass public and private properties, as per the council’s statement.

At least 16 people have been killed and 52 wounded in recent fighting between armed groups in Tripoli. No motive for the fighting was immediately apparent, but it is the latest wave of an on-and-off violence to rock the capital as rival militias, each with their own political affiliations, compete for power.