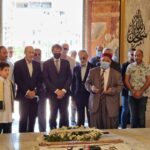 The Head of Italy’s consulate in Benghazi has expressed regrets for his country’s colonization of Libya over a hundred years ago.

Carlo Batori made his remarks during his first visit to the mausoleum of Omar al-Mukhtar, the famous leader of Libyan resistance against Italian colonization, which took place on the 110th anniversary of the occupation on Friday, October 15.

“The Italian occupation of this land started here in Benghazi exactly 110 years ago, on 15 October 1911,” Batori said. “Over the past years, many important leaders in my country have expressed their regrets on behalf of the Italian people for the great suffering caused to the Libyan people as a result of Italian colonization.”

“As an official of the Italian state, to which I have the privilege to belong, I also renew, and honestly on this day, to express this regret,” he said.

“Unfortunately history – whether that which we are proud of or that which is not worthy of praise – cannot be rewritten. Instead, the future can be written,” Batori said.

“Perhaps my practical mission in the land of Cyrenaica is also to be a witness to the Italian desire to build with Libya a future of prosperity and development for our children,” the Italian consul added.

“I would like to finish by remembering a famous phrase Omar Al-Mukhtar said moments before climbing the gallow: “I will live longer than my hangman”. Indeed, what he said has come true. After many years of his death, the Lion of the Desert is still alive in the memory of every Libyan, whether young or old, poor or rich, from Cyrenaica, Tripolitania or Fezzan.”

“Omar Al-Mukhtar remains a symbol of the pride of the nation and a symbol of unity, independence and freedom of Libya. Honoring him in this place, I am confident that Libya today and tomorrow will follow in the footsteps of its hero, and establishes itself in the world as a unified country, proud of its freedom and independence always,” Batori concluded.