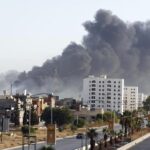 A staff member of the Italian embassy in Libya was wounded during the armed clashes that took place in Tripoli on Tuesday morning, the embassy said.

During the clashes, a member of the diplomatic police of the Italian embassy sustained an injury from gunshots that were fired indiscriminately, according to the embassy.

“We are close to the captain, his family and his colleagues in the diplomatic police,” the embassy said via Twitter. “We look forward to seeing him back to work again soon.”

Italy expressed “great concern” about the armed clashes in Tripoli, and urged “all actors to abide by their commitment to refrain from violence and call for immediate & sincere efforts for a consensual path towards national elections to be attained in the UN-facilitated mediation efforts underway in Cairo.”