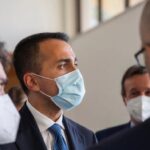 Italian FM: We’re working non-stop on Libya and results are coming in

Italian Foreign Minister Luigi Di Maio stated on Monday that his country’s commitment is “constant” in Libya, adding that his government is “non-stop and results are coming in”.

“The first objective achieved is undoubtedly the birth of a government of national unity, unthinkable a year ago,” Di Maio said in a statement via his official Facebook page. “Now let’s focus on the next elections on December 24. Today I went to Tripoli, Benghazi and Tobruk to reiterate it to the local institutions.”

“Free and democratic elections will have to represent another stage in the Libyan political process carried on at the impetus of the international community, which sees Italy at the forefront,” he added.
“Helping Libya, even by increasing economic exchanges, means working for security in the Mediterranean, protecting people’s lives from human traffickers and fighting terrorism without a stop,” concluded the Italian chief diplomat.
Tags:ItalyLibyaLuigi Di Maio