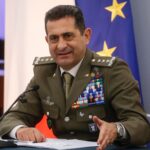 Italy maintains its military presence in Libya with a “mission that has evolved” over the years, based on the “needs proposed by the government of Tripoli”, said Italian army corps general Francesco Paolo Figliuolo during his recent visit to Libya.

Figliuolo was Misurata last Thursday where met with Italian soldiers of the Hippocrates Task Force. Formally, the purpose of the mission was to deploy a field hospital to fight ISIS.

However, according to Figliuolo, the mission has evolved because the threat of ISIS is “no longer immanent and strong as it was in the past months and years”.

“Today our mission has evolved,” Figliuolo told Italian soldiers in Misurata. “It has changed on the basis of the needs proposed by the government of Tripoli”.

“There is a Role1-Plus medical unit in Misurata, so we are still able to provide support not only to our staff, but also to the local population, providing telemedicine, physiotherapy and specialist visits, with the possibility of transferring , if necessary, children and adults at the most accredited hospitals in Italy and, among these, our Celio Military Polyclinic,” he added.