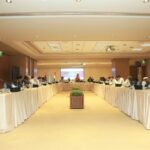 Libyan talks on a constitutional path conclude today in Cairo

The third and final round of talks between the members of the House of Representatives and the High Council of State, end today in Cairo, announced U.N. Advisor on Libya, Stephanie Williams, on Saturday.

“Members have spent the last two days in continued plenary consultations and in breakout groups, tackling the remaining articles,” Williams stated via Twitter.

“The drafting committee is now working to finalize the necessary language,” she added.

2/2 The drafting committee is now working to finalize the necessary language. pic.twitter.com/OCKB5mvmSN