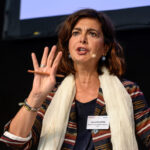 Laura Boldrini, a member of Italian Chamber of Deputies, has called on her country’s parliament not to ignore human rights violations “committed by the Libyan Coast Guard,” following a shooting incident against migrants.

“Shooting a boat crowded with migrants is a criminal act, and therefore the parliament cannot turn its face to the other side, because the Libyan patrol boat were made in Italy,” Boldrini said during a press conference with deputies from various parliamentary blocs and representatives of humanitarian NGOs.

“So, without this role, would the Libyan Coast Guard have gone so far as to shoot migrants and send them back to those horrible detention centers? No, it wouldn’t have been able to,” she added.

“It is unacceptable for the sinking of migrant boats to become a tool to control migration flows,” said the Italian MP.