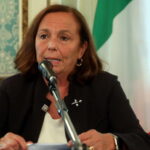 ROME – Italy is to sign a protocol to bring 500 migrants from Libya to Italy. The move was announced by the Italian Interior Minister Luciana Lamorgese during a conference in Rome called “Governing Migration: The Best Practice of Humanitarian Corridors.”