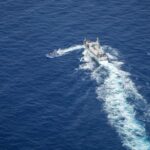 Italy launched an investigation against the Libyan Coast Guards after footage emerged last week, which appeared to show the guards firing shots on a boat full of migrants in the Mediterranean Sea.

Luigi Patronaggio, a Sicilian chief prosector, confirmed to The Guardian on Monday that an inquiry was launched in the city of Agrigentoto. He added that in order to continue the investigation, he needed “authorization from the Italian ministry of justice, given that the object of the proceeding is a foreign authority”.

The Sea-Watch International, a search-and-rescue NGO, shot the video last Wednesday and said the incident occurred in Malta’s search and rescue zone.

Despite the incident allegedly happening in Malta’s zone, Maltese authorities have yet to react to the incident