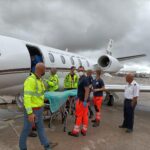 The Libyan Air Ambulance flight with three injured Libyans on board landed on Thursday at the Italian military airport of Pisa, announced the Italian Foreign Ministry.

All three are victims of the deadly fuel tanker explosion in the southern Libyan town of Bent Bayya, which took place earlier this month.

The patients arrived to Italy from Benghazi, and will be “transferred and assisted by the health services of the Piedmont, Liguria and Veneto regions,” the Italian ministry said.

It also stated that this medical evacuation mission was carried out in close collaboration with the Libyan authorities, and coordinated by the Italian Department of Civil Protection, Italian ministries of defense and foreign affairs, in addition to other bodies.

On August 6, Italy had taken in four other Libyan patients who have been wounded in the same incident, including an 11-year-old  boy with second and third degree burns.