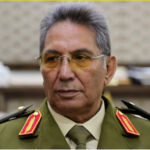 Member of the Libyan 5+5 Joint Military Committee (JMC), Lieutenant-General Marja’ al-Amami, said the Committee, accompanied by a delegation from the UN Support Mission in Libya (UNSMIL), will visit the countries involved in the Libyan crisis to discuss the mechanism of withdrawing their forces from the country.

In press statements, Al-Amami indicated that they called on UNSMIL, American Ambassador, and some representatives of countries in a closed-circuit meeting hosted by Britain, to help JMC in the process of mercenaries and foreign forces exit from Libya,” adding that they are working to “start the removal of mercenaries before the election date.”

“The arrival of the observers will coincide with the start of the mercenary exit mechanism, and this will be within ten days,” he said, denying their discussion with foreign diplomats about the issue of dismantling armed groups.