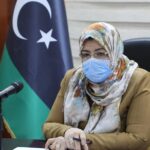 Justice Minister: Mitiga prison, other detention centers are not controlled by GNU

Libyan Justice Minister Halima Abdurrahman confirmed on Thursday that Tripoli’s Mitiga prison, as well as a number of other detention centers across the country, are not controlled by the Government of National Unity.

Speaking to Asharq Awsat newspaper, Abdurrahman said that her government was able to secretly negotiate the closure of a number of detention facilities. However, the minister pointed out closing the rest of prisons and detention facilities would be a difficult task since this issue is tied to disarming the country’s militias and armed groups.

The minister’s remarks notably comes after the daughter of Abdullah Senussi, the intelligence chief of late Libyan ruler Muammar Gaddafi, publicly revealed that her father was denied treatment for cancer in Mitiga prison, where is currently detained.

“The conflicts and divisions that the country went through resulted in the emergence of illegal and unregulated prisons,” Abdurrahman told the London-based newspaper. “During the last period, we were able to close some of them through private negotiations away from the media, in order to ensure the release of those illegally detained, and to reveal the fate of those missing”.

“We will continue to close them all,” the minister affirmed.