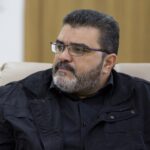 Reda Afritis, the Chief of the Cabinet Office in the Eastern Region, was released yesterday after he was kidnapped two weeks ago in Tripoli by an unknown armed group, according to local press reports.

Both the U.N. Mission in Libya and the U.S. Embassy had condemned the abduction of Afritis and called for his immediate release.