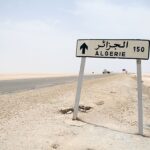 Libya, Algeria to reopen border crossing in between soon

The mayor of Ghadames municipality, Qassem Al-Manea, has revealed that work is underway to reopen the Libyan-Algerian border crossing in the near future.

Al-Manea added, according to Hakometna platform, that the border crossing will initially be opened for commercial purposes only, and then for travelers according to the agreement concluded between the two sides, stressing the endeavor to reopen the crossing for all citizens to facilitate movement between the two countries.

Al-Manea considered this step will get Ghadames city out of the economic stagnation it is experiencing, adding that it was agreed during the last meeting between the formed committees, to hold a Libyan-Algerian meeting next week in preparation for the opening of the border crossing, after a whole year of discussions between the security, military and economic agencies, as he said.