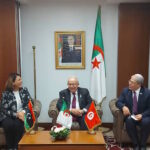 Foreign ministers of Libya, Tunisia and Algeria discussed during a session of joint talks the latest developments of preparations for the upcoming elections in Libya and efforts to push the security-military track for easing the crisis in the country, according to a joint statement.

During the session, held in Algeirs on Monday, Libyan Foreign Minister Najla al-Mangoush, and her Algerian and Tunisian counterparts, Ramtane Lamamra, and Othman El-Grandi, exchanged views on the upcoming meetings on Libya, especially the Paris conference, where they emphasized the main role that must be played by Libya as an essential partner in this conference, said the statement, issued at the conclusion of the talks.

They also expressed their determination to continue joint efforts in close cooperation with all Libya’s neighboring countries to enable it to embody the priorities of this important stage by ensuring success of elections, unifying institutions, withdrawing mercenaries, fighters and foreign forces, and advancing national reconciliation efforts, in accordance with the outcomes of the Berlin conferences and relevant Security Council resolutions, the statement added.

The three ministers agreed to follow up and intensify consultation and coordination in this regard and on other issues of common concern, it pointed out.