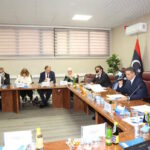 Head of the Libyan High National Elections Commission (HNEC), Imad al-Sayeh, has reviewed in an expanded meeting with ambassadors of US, Japan, and some European countries the latest arrangements for the electoral process in accordance with the new political developments, and HNEC level of readiness to hold the upcoming elections on December 24, according to HNEC.

The meeting, held at HNEC headquarters Monday, was attended by the Ambassador of the European Union and the ambassadors of France, Italy, the Netherlands, the Head of the Political Bureau of the British Embassy, and the Deputy Special Envoy of the United Nations and Resident Representative of the UN Development Program (UNDP), HNEC said in a statement.

The meeting was also attended through the Internet by the ambassadors of the United States, the ambassador of Germany and the chargé d’affaires at the Embassy of Japan, “in the framework of the support and follow-up of the international community, countries and organizations that provided technical and advisory support to the commission for the stages of implementing the electoral process in Libya,” it added.

0 0
Previous : JMC agrees with neighboring countries to expel mercenaries from Libya
Next : Libya elections and security on table of foreign ministers joint talks in Algiers